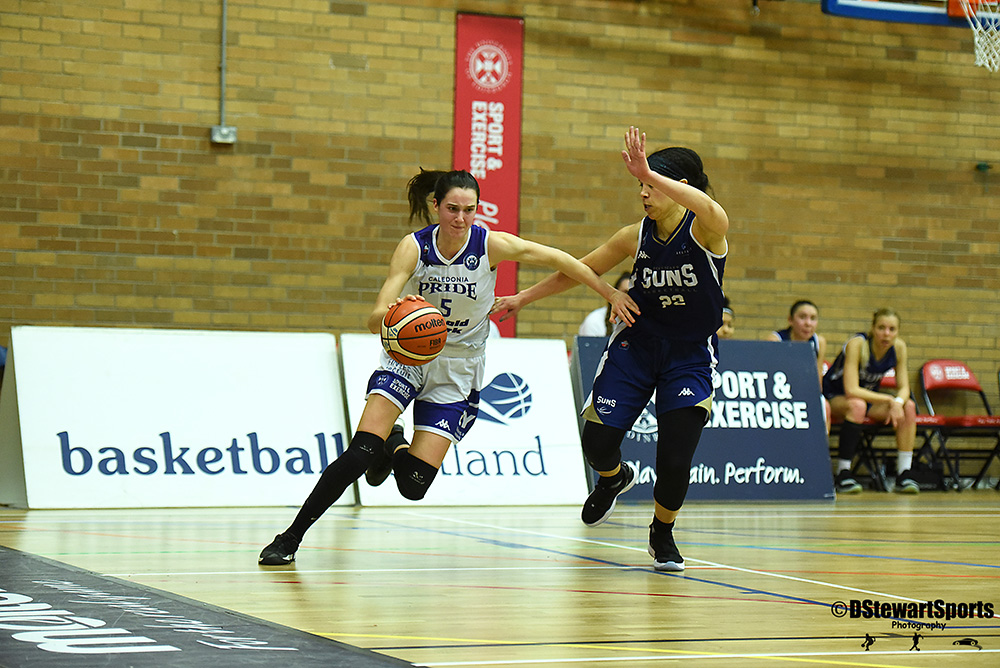 The game started evenly, with Sevenoaks scoring first before Pride answered back with a layup from Stella Fouraki and a corner 3 from Ella Doherty, which was then promptly answered by a 3 from Suns’ league MVP Cat Carr. However Suns were struggling to deal with the early pace set by Pride, as Hannah Robb and Sian Phillips each converted driving layups in transition to give Pride a lead. On her 50thappearance for Pride at age just 17, Pollyanna Storie then helped to build Pride’s lead with 6 points in the 1stquarter as the young Scots built a 19-13 lead. However a flurry of scoring from GB star Janice Monakana for Sevenoaks to close the quarter saw that lead reduced to 19-18 at the end of the period.

The 2ndperiod began with both teams playing tough defence and limiting easy scoring opportunities for each other as the score moved slowly to 25-24 in favour of Pride at the midpoint of Q2, with Fouraki and Phillips adding the points for Pride. A 4 point run by Suns was countered by a customary 3 pointer by Hannah Robb as the scores remained tied at 28 with 3 minutes to play in the half. However Sevenoaks then produced an 8-0 run, including 6 points from Renee Busch, on their way to building a lead that they would maintain going into the half, where the score was 37-30.

Pride briefly cut into the Sevenoaks lead at the start of the 2ndhalf through a layup by Ella Doherty, but the experienced Suns then stepped up the defensive intensity that had taken them to the top of the standings as they forced a number of turnovers on their way to a 7-0 run that led Pride coach Bart Sengers to call timeout to talk it over. Sevenoaks continued to make life difficult for Pride after this, extending their lead to 51-32 before a score by Stella Fouraki stopped the bleeding for Pride. A 4 point play from Storie helped trim the deficit at the end of the 3rd, with the score being 52-38 in Sevenoaks favour going into the final quarter.

Some good defence for Pride to start the 4thsaw them regain some energy on the offensive end to start the quarter, however scores from Phillips, Robb and Fouraki were answered by Suns as Pride found it hard to make a run to get a foothold in the game. But Sevenoaks then found their flow again, as another 8-0 run saw them establish a 23 point lead with 2 minutes to play. A pair of free-throws by Maela Faleu were countered by a late layup for Irene Garrido-Perez as Suns maintained their lead to close out the game with a final score of 67-44.

Pollyanna Storie top scored for Pride with 12 points, while Stella Fouraki added 9 points and 15 rebounds and Hannah Robb chipped in 9 points and 4 assists.

Renee Busch led all scorers for Suns with 17 points, with Janice Monakana adding 15.

After the game, Pride’s Pollyanna Storie was positive about the team’s performance, saying: ” It was a good game for us. All week in practice we had been focusing on us and how we can be a stronger unit together. This showed as we gave the reigning champs a good game, and one we can be proud of.”