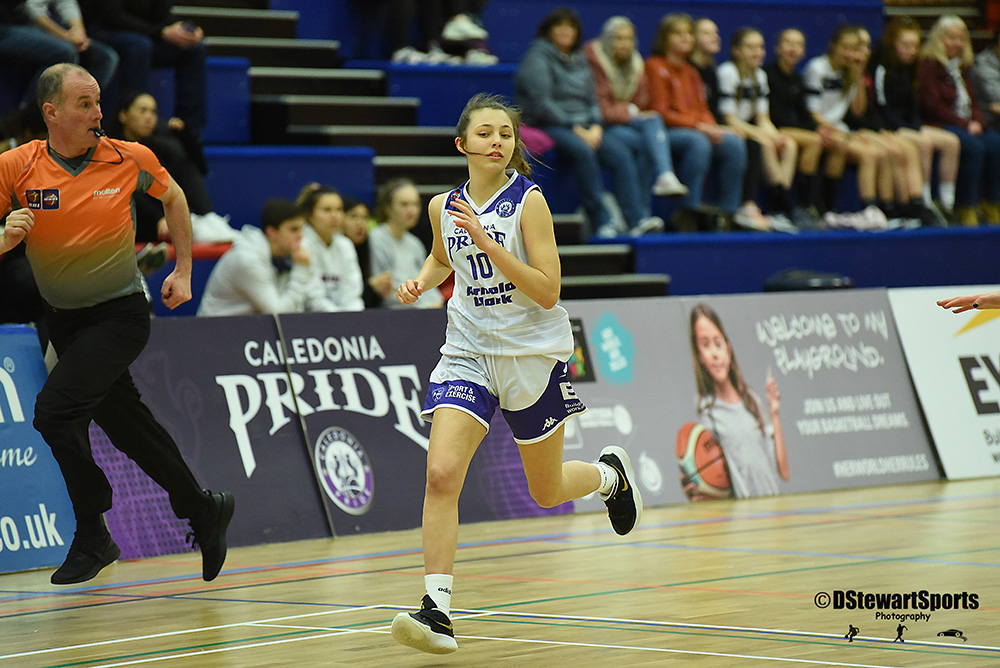 Hannah Robb (19 points, 6 rebounds, 5 assists) was fired up as the game began, contributing 13 of Pride’s first 14 points. The offensive onslaught meant that Pride had a five-point lead in the opening minutes.

A hook shot from Pollyanna Storie (10 points, 8 rebounds) followed up by a three-pointer from Jannike Marshall kept the offensive flow going. Late offences from Maella Faleu and Jenna Beattie made sure Pride held on to a four-point lead at the end of the first. 19-23.

Mystics’ composed comeback resulted in them gaining the lead early in the second. Pride consistently kept within a point of the lead following a jump shot from Stella Fouraki and a three-pointer from Storie. This pattern repeated itself until Sian Phillips completed a three-point play to put Pride up by two. However, soon after Mystics regained the lead once again before a three-pointer from Robb ensured Pride trailed by one as the back-and-forth encounter continued.

The duo of Phillips and Storie worked together to contribute to the lead changing hands. However, Mystics were determined to tie up the game and forge ahead on home soil. A lay up from Hansine Marshall made it a two-point game as half time commenced. 42-40.

Ella Doherty (15 points, 5 rebounds, 5 assists) began to find her offensive stride as the second half got underway. She went on a 5-0 run, which included a three-pointer, to bring it back to a one-point game. After Mystics got ahead, she fired up another three-pointer to slash Pride’s deficit once again. A free throw from Hansine Marshall meant Pride were within two points of the lead as the third progressed.

Doherty continued to shine as she made a lay up to tie up the game. Offensive flurries from Jannike Marshall and Storie as well as gritty defence from both sides meant Pride had a one-point lead with 10 minutes to go. 57-58.

Pride continued to fight as a lay up from Robb meant the one-point game was still intact. However, Mystics went on a scoring run of their own and amassed a six-point lead as the final minutes approached.

Last ditch offences from Doherty, Fouraki and Robb brought it back to a one-possession game. Despite this, Mystics applied tough defence and made their shots in the last couple of minutes to claim the five-point win in Manchester. 73-68.