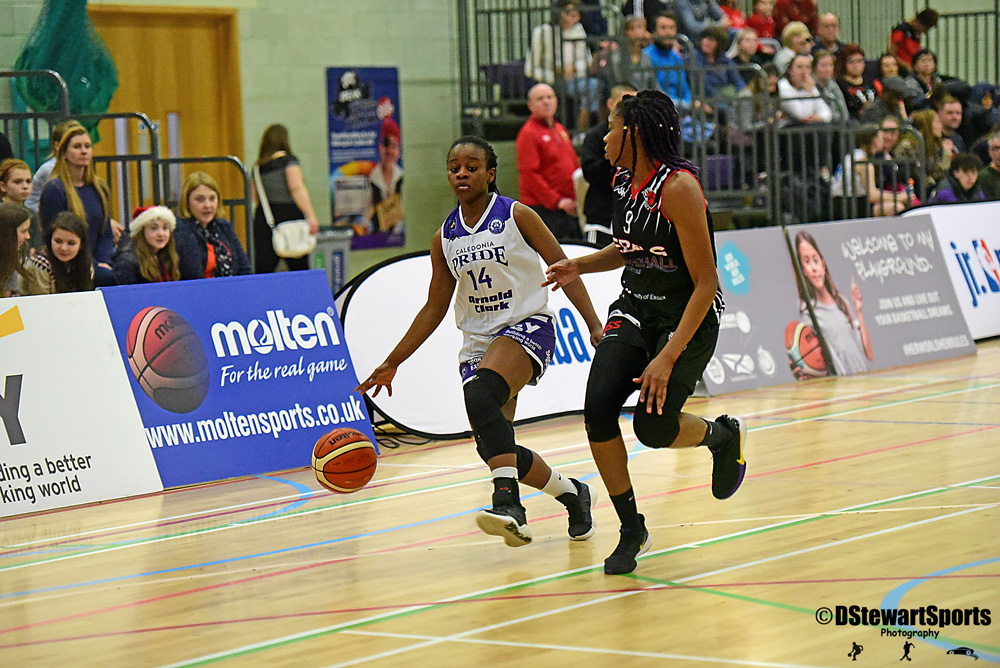 Caledonia Pride suffered a 51-74 loss to Essex Rebels on Sunday as the teams travelled to play at The Peak in Stirling.

Pride started off strongly as Ella Doherty opened Pride’s account with a lay-up. Stella Fouraki (17 points, 14 rebounds) continued Pride’s momentum as she scored one point from the free throw line to kick off her double-double campaign. Sian Phillips (12 points, 16 rebounds) followed up the offence with a jump shot on route to a double-double of her own as the teams traded baskets in the opening minutes.

Pollyanna Storie came into the game late in the first and made an immediate impact on the floor after a 5-0 run from Rebels. Consistent free throws from Essex’ Jessy Ward extended their lead but a late three-pointer from Jannike Marshall put Pride within three as the first quarter came to a close. 12-15.

Top scorer Chelsea Small was fired up for Rebels as she had eight points within the first two minutes of play. Pride’s offensive prowess started to fade as they only scored three points at the beginning of this period as Essex continued to forge ahead.

The opposition continued to demonstrate their scoring capabilities as they went on an 8-0 run, spreading the scores all across the floor prior to Phillips replying from the free throw line. With just eight seconds left in the half, Fouraki cut to the basket to make a lay-up as Pride trailed by 18 going into halftime. 19-37.

After a low scoring but defensively intense few minutes from both sides, the trio of Fouraki, Phillips and Doherty went on a 7-0 run for Pride, the latter scoring a big three-pointer.

Fouraki dropped back-to-back jump shots, with both assists coming from the hands of captain Hansine Marshall. Late scores from Phillips and Jannike Marshall continued to build Pride’s momentum as they went on another 7-0 run to end the third. 35-48.

Pride gave away two costly fouls at the start of the fourth which Essex capitalised on. Storie replied with four uninterrupted points for Pride but then Rebels found the composure to go on a 6-0 run, prompting responses from Fouraki and Phillips.

Despite late baskets from Fouraki, Phillips and Maela Faleu Essex’ offensive dominance proved too much for Pride as the opposition claimed the 23-point win in Stirling. 51-74.

Pride return to action in the New Year as they play Leicester Riders at Pleasance Sports Complex on Sunday January 4th at 4:30pm.