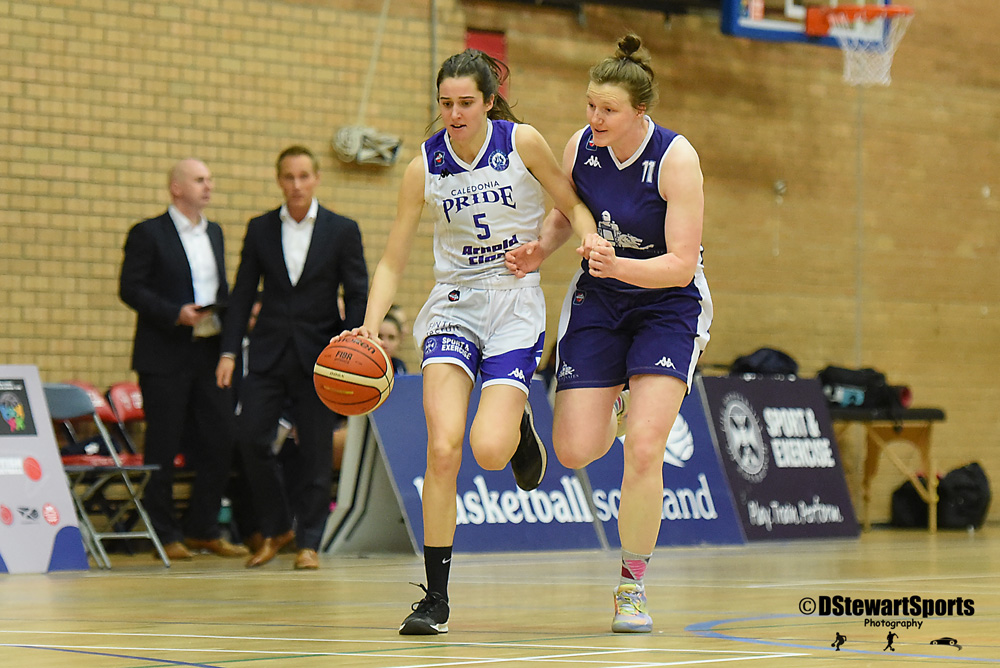 Caledonia Pride suffered a 12-point loss, 65-77, to Durham Palatinates in a close game at Pleasance on Sunday.

Durham started off with the advantage as they won the tip and GB forward Mollie Campbell (13 points, 7 rebounds) secured the first basket of the afternoon. The game’s top scorer, Stella Fouraki (26 points, 12 rebounds), kicked off her double-double with a layup. Palatinates’ Cierra Ceazer (12 points, 6 rebounds) responded with a layup of her own only for Pollyanna Storie to keep up Pride’s momentum. Scottish players made an impact on the opposite side of the floor as Claire Paxton (13 points) nailed a fade away to close out the first five minutes of play.

Former basketballpaisley player, Deanne Hayward (14 points), continued to add to Durham’s tally with a big three-pointer. Fouraki and Hannah Robb (10 points, 3 rebounds, 6 assists) picked up the pace for Pride as they cut Durham’s lead to a single point. A layup from Sian Phillips (8 points, 5 rebounds) gave Pride the lead, which was further extended following a three-pointer from Jannike Marshall. Durham stepped up the intensity to end the quarter, going on a 6-0 run to lead by two at the end of the first Pride.15-17.

Ella Doherty used speed to her advantage to kick off the second quarter before Durham went on another scoring run, adding seven without reply. Robb and Campbell proceeded to trade free throws, both being consistent from the line, before Fouraki and Robb kept Pride’s rhythm going with consecutive layups.

Hayward and Paxton used their two-man game to punish Pride on the offensive end as Paxton nailed a jump shot after an assist from Hayward. Hayward was then fouled by Robb and made two from two from the free throw line. Despite quick paced layups from Fouraki and Storie, it was Palatinates’ MacDonald who ended the first half with a three-pointer, putting Durham up by nine. 33-42.

Fouraki and Paxton went back-and-forth with jump shots at the beginning of the third whilst Fong Lyew Quee and Campbell made some crucial offensive plays for the opposition, with the former cashing in a three-pointer and the latter completing a three-point play after being fouled by Fouraki.

Pride put in a shift as the third drew to a close as baskets from Phillips, Fouraki and Hansine Marshall made sure the flow of the game kept going Pride’s way. Durham responded late in the quarter meaning they maintained a 9-point lead going into the fourth. 51-60.

Back-to-back three pointers from Durham gave them their biggest lead of the game at the beginning of the fourth. Despite the best efforts from Fouraki and Robb, the likes of Ceazer and Fong Lyew Quee cut to the basket quickly on fast breaks to score layups and further extended Durham’s lead.

Robb, Kerr and Fouraki all found the basket as Pride fought their way back into the game but it was Durham who scored the final points through captain Fong Lyew Quee, securing the 12-point victory for the Palatinates. 65-77.

Pride return to action in two weeks as they welcome Essex Rebels to The Peak in Stirling on December 15th.